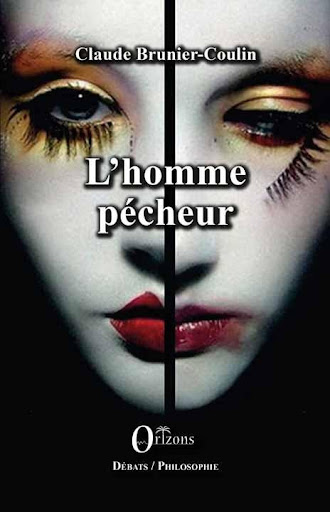 The aim of this book is to deconstruct Luther’s famous phrase, simul justus et peccator. Man as a sinner is first taken as a (so called) concept that contemporary thinking does not deal with, in order to make us better go forward in an heap of thoughts without any beacon, to flee from the fear of thinking. It has then rebuilt itself in the model of agent imagination as reality and event principle. In imagination thinking, imagination is a soul. How can I access to my righteous nature knowing that I am a sinner? To the certainty of being a sinner comes a grace located between the visible world and the invisible one, in which time is suspended. Imagination is a soul and images are life’s metaphors. The imaginal world is located between the perceptible world and the imaginal world, between the spiritual and the corporal. We are invited to travel in the light of Iranian mysticism Agent imagination is viewed according to the metamorphosis principle. The imaginal, as an “I” instance, changes according to the plane in which the subject is situated. Justification implies metamorphoses of the subject, who finds its identity in relying on God. This analysis, as an integral approach, rejects the conception as man as sinner in the frame of a dualism between the perceptible and the intelligible, between matter and mind. This reversal, as attractive as it may be, makes simplifications where duality delimits the era of a metaphysic whose decay has taken place in our age. 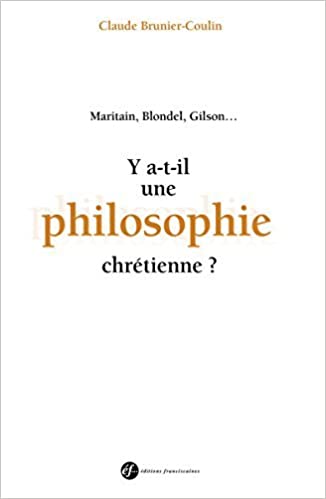 Y-a-t-il une philosophie chrétienne ? i.e. Is there a Christian philosophy ?

The main actors of a famous colloquium, which took place in Juvisy in 1933, were Maurice Blondel, Jacques Maritain, Gabriel Marcel, Étienne Gilson, Édith Stein and many other celebrities. The question was “Is there a Christian philosophy?”

In an article that has remained famous, two years before, in 1931, Émile Bréhier denied the existence of a Christian philosophy in theses terms: “After all, we did not find it neither by Saint Augustine, who firmly makes the separation between the Word made flesh from the philosophers’ reason, nor by saint Thomas, who only lets for reason a precarious existence, neither by the 17th century rationalists, whose doctrine, going toward natural religion, looses contact with Christianity, nor by the 19th century philosophers, whose Christian philosophy quickly bends towards a sort of humanism.”

The importance of this colloquium lies in the fact that Émile Bréhier’s thesis has been criticized in Juvisy by eminent individuals. Critics have been made by participants according to different points of view. The adopted positions can be summed up this way: all participants agreed that there were no stricto sensu Christian philosophy because reason cannot reach by its own strength the Revelation. Revelation and its content are characteristics of theological works.

From this basis, points of view are shared, but also divergent between Maurice Blondel, Étienne Gilson or Jacques Maritain in particular.

In spite of these variations, philosophy is said to be Christian: not formally, but in its practices because of the influence of Christian values both on the knowledge and practical levels. 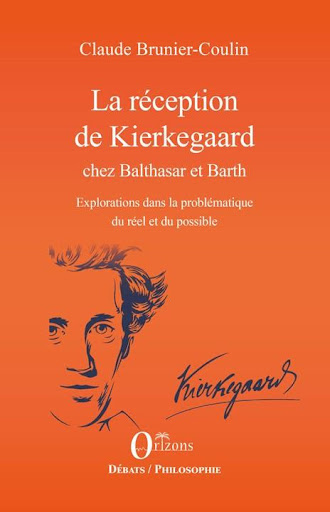 Balthazar’s and Barth’s reception of Kierkegaard

Assuredly Karl Bath and Hans Urs von Balthazar have been influenced by Søren Kierkegaard, sometimes called “the father of existentialism”. The first clearly asserts it in The Epistle to the Romans, while the latter does not cast any doubt in The Christian and Anxiety. Yet both of them have been claimed to be “Hegelians”, even when Kierkegaard was fiercely opposed to Hegel and his “system”.

This book takes up texts so as to study the reception of Kierkegaard in the works of theses two great theologians through the problematic, very important for both of them, of the real and the possible.

This book presents the retake of Kierkegaard and his existentialism, while showing in what extend Barth and Balthazar have gone beyond. 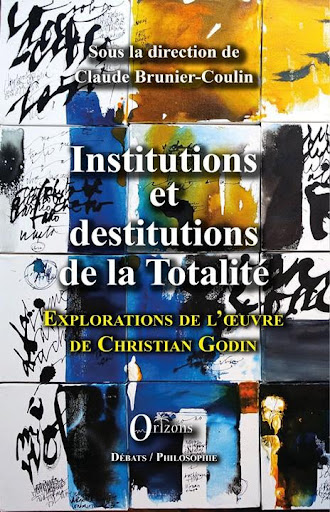 Institutions and depositions of the Totality

This book collects the papers for a symposium which took place from the 24th to the 26th of September 2015, entitled Institutions and depositions of the Totality. Exploring the works of Christian Godin. This symposium took place in two locations: on the first day, the 24th of April, it was held at the Maison des Sciences de l’Homme in Clermont-Ferrand; thereafter, it lasted a day and half at the Université Paris-Descartes, in the premises of the Sorbonne, on the 25th and 26th of September.

The term “institution” immediately suggests the establishment of a principle from which some economics deploys itself. This principle, or axiom, would be an invariant set up as something inspiring respect, fear and deference, something untouchable by the unforeseeable. But “deposition”, which comes immediately after, would affirm that such a principle could seem transitory. The plural form indicates that the totality establishes and deposes itself through various modes. That being said, a question straight away emerges: how a principle that bequeaths a space of intelligibility can be dissolved, disintegrated, dismantled?

This symposium attempts to answer to this issue. 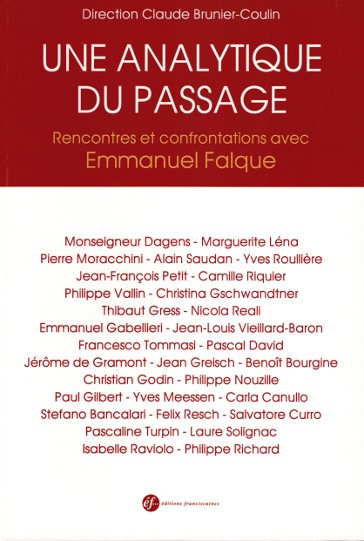 An analysis of passing

Book that collects the papers for a symposium which took place from the 5th to the 7th of July 2014 in Chevilly-Larue, and entitled An analysis of passing. Meetings and Confrontations with Emmanuel Falque. This symposium was held under the aegis of the École Franciscaine de Paris (Franciscan School of Paris).

The topic deals with the issue of passing in the works of Emmanuel Falque, from various and complementary points of view, following a division that reflects the key features of his works.

The works’ existential dimension: Le triduum philosophique gathers the personal works (Le Passeur de Gethsémani ; Métamorphose de la finitude; Les Noces de l’Agneau). Finitude and incarnation puts us in front of the “who” of the incarnation, which is one of those answered questions. The one who became flesh is not the divinity itself (the divine nature). It is neither God the Father nor God the Holy Spirit, but God the Son precisely. Where does the Rubicon flow? deals with connections between theology and philosophy in his book Passer le Rubicon. Does fording represent crossing or transgression?

The Phenomenological disputes confront the destiny of the history of philosophy as an “amorous combat”, which is the title of Emmanuel Falque’s last book. It is about a debate between some thinkers indulging in a real philosophical disputatio based on the famous “theological watershed of French phenomenology”. Facing the logic of clash between philosophy and theology, Emmanuel Falque invites to a real dialogue and, at the same time, a real confrontation between these two disciplines. Several authors are summoned on the stage of the “phenomenology of limits”: Jacques Derrida, Maurice Merleau-Ponty, Emmanuel Lévinas, Jean-Luc Marion, Michel Henry, Jean-Louis Chrétien, Jean-Yves Lacoste, Claude Romano, Jean Greisch.

Theological approaches show that analogy, liturgy and pastoral have necessarily to be understood through their relation to body, while Medieval roaming refers to Emmanuel Falque’s first steps in philosophy and theology: Anselm, Bonaventure. 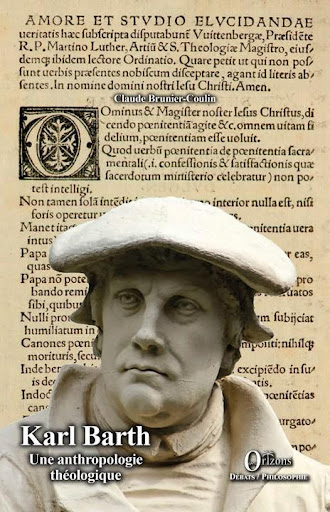 Karl Barth (1886-1968) is one of the major authors of the 20th century Christian theology. Guided by the question “Who is God?”, we offer a theological review of his works.

The study of the Epistle to the Romans leads to a review of his Dogmatics published between 1932 and 1968 and left unfinished. The objective is to understand by which ways he transformed his idea of “God as completely Other” into a “consistent theology”, going up to investing “God’s humanity” in Jesus professed as the Christ. The influence of his thinking on the works of many theologians is quite clear: Paul Tillich, Wolfart Pannenberg, Jürgen Moltmann, Eberhard Jüngel, Hans Urs von Balthasar, Henri Bouillard and Hans Küng.

Engaged with political actuality: against the war in 1918, against Nazism in 1933, against the atomic bomb and American imperialism at the end of his life. Karl Barth thus offers a theology going beyond the bounds of dogmatics. Individual, social and political, for him ethics are not an appendix to dogmatics. Taking an interest today in Karl Barth’s thinking enables us to question today’s existence in its theological, ethical and political dimensions. 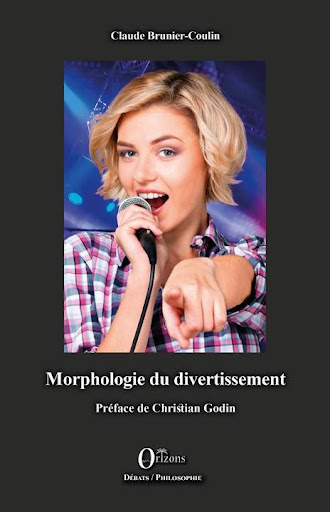 Morphologie du divertissement is a study upon television entertainment. The show is considered as a tale, with a structure defined according to the principles of text semiotic analysis: narrative structure, actantial model, and literary register. The main selected stylistic devices are the following: immolation of the candidate, ribaldry, laughter, applause, charismatic domination, cathode frenzy, preaching, illusory omniscience, blurring, continuous logorrhoea, required unanimity. Television entertainment has another purpose: propagating and indoctrinating with liberal-libertarian ideology which intends to rebuild the world. The television show “N’oubliez pas les paroles” is not studied for itself, but as a new paradigm for all television shows: entertainment, culture, politics, sports, games. 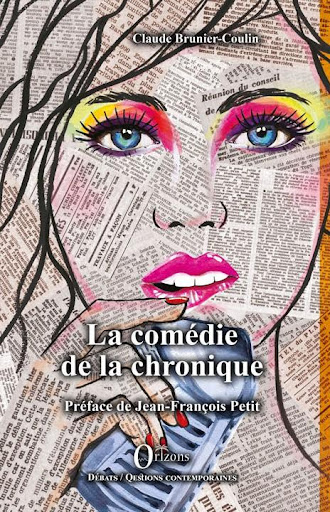 Column Comedy tries to answer the following question: “What is a column?” The author develops his argument in five points: (1) radio columns have their philosophical foundations in deconstruction, in particular with Derrida and Lacan; (2) columns consist in a liturgical institution with its priests, rites, unfolding and vocabulary; (3) columns are a series of unjustified and non-referenced statements, resulting in reason being banned for the benefit of musicality, set up as a criterion for truth; (4) columns develop an aporetic thought practice; (5) columns spread the ideology of libertarian liberalism. This book consists of a thorough thesis that vigorously criticises the communication world, right in line with Maurice Clavel’s transcendental journal, by which the author explicitly claims to be inspired. In this world reigns supreme the columnist’s ideology. The author studies the speech acts as well as thought schemas that govern our columnists. Those columnists are in line with reinforcing these post-truth schemes, which are so dangerous to democracy.